Chances Are, We Really Aren’t Alone! And Science Agrees!

Although we have no definitive evidence, even the most skeptical of scientists have to admit that it is a statistical probability, that life, in one form or another, will exist somewhere else in the Universe.

Simple percentage terms tell us that life almost has to exist elsewhere. Of the millions and millions of planets, moons, solar systems and even other galaxies, if only 1% were to have just the conditions for life to develop, it would still leave hundreds of thousands of potential targets for exploration. 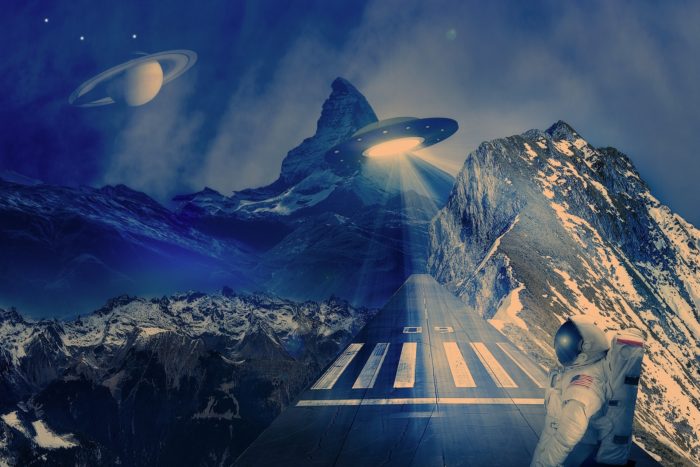 Of course, this is all on the assumption that life will be carbon-based. Essentially using the same building blocks as life on Earth does. However, that might not be the case.

What If Alien Life Is Exactly That?

There is also the possibility that alien life – in whatever form it takes – may be completely alien to us in terms of its molecular structure and even the “building blocks” it uses as its base for life. For example, many planets and moons have atmospheres containing gases that are poisonous to us. However, these same gases may be ideal for life forms that have developed in that environment.

Furthermore, here on Earth, more and more we discover there are many life forms that thrive in otherwise hostile environments. Whether it be in the freezing conditions of Antarctica or miles below the ocean in boiling conditions on the seabed. These are extremophiles, and their discovery gives hope to those who believe in alien life. That such organisms, or even small insect-like creatures, could exist in the equally inhospitable worlds of Venus or Mars.

In fact, the famous ALH84001 meteor, which fell from Mars, contains such alien organisms. Furthermore, it is not the only meteor that has fallen to Earth from another planet containing proof of alien life.

It could even be that alien life is not just different in terms of its “building blocks”. It could be that they are in a form that is completely unimaginable to us. After all, we are talking about alien life, right? Is it possible that, given our limited perception, that alien life forms are just not visible or detectable to us?

Of course, our neck of the cosmic woods may be unique in that our planet is only one where life thrives. Might it be that Earth is an anomaly to our solar system, but not to the rest of the Universe overall? Perhaps, other solar systems are absolutely are full of life, while ours is completely dead, aside from Earth.

Comparatively speaking, life has only occurred relatively recently in our solar system, and rapidly at that. Perhaps this shows that conditions do not have to be “ideal”, and that development of life is not so much out of luck but inevitability. If this is the case, then it stands to reason that life will have developed in a similar way elsewhere.

After all, we are all made of the same matter – stardust. So if each planet can be broken down to the same matter, then surely each planet has the potential for life. If this is not the case, perhaps we should look again at what makes Earth, and humans, so special.

What Is Special About Moons of the Gas Giants?

While efforts continue to search for life on Mars, or even evidence of past life on Mars (and with good reason), as we have written before, many moons have the potential to host life. Our own moon, in spite of the several missions to our cosmic neighbor, is still a mystery to us. However, structures on the surface, or under the surface away from the elements of space, would allow for colonization.

Other moons in our solar system would also make ideal destinations for human colonies, and also have signs of life – albeit microbial. Of course, if we do manage to make it out to the some of the moons in the outer reaches of our solar system, we might find not only evidence of alien life, but that other visitors have already been there before us.

The amount of moons around the gas giants that show signs of geological activity is of interest for example. Is it the gaseous conditions of these huge planets that provides its moons with such activity? Or might it be, given that many of the compounds and elements of these cosmic giants would be great sources of energy, that other travelers have established their own “waystations” in order to take advantage of the natural fuels contained nearby?

A story that appeared in the mainstream news towards the end of 2017 made such notions a little more plausible.

In December 2017, scientists would announce that there was reason to believe a huge object that had made its way past Earth the previous month may actually be an alien craft containing alien technology.

The object — named Oumuamua — would come to the attention of astronomers as a cigar-shaped object. Logic suggests it to be an asteroid. However, the overall shape of the object is not as random as scientists would expect. While it was still hundreds of meters in length, its width was only a tenth of this. It also appeared to be able to resist the “pull of sun” and appeared to be making its way out of the solar system altogether. All of these things – as outlandish as it sounds – appears to suggest intelligent control.

Furthermore, whatever the object eventually proves to be, it appears to have originated from outside of our solar system. This alone would make it a first.

Breakthrough Listen is the group in charge of attempts to identify the craft. They state that if it is an alien craft, it would provide a perfect explanation for the anomalies witnessed so far. They intend to aim the Green Bank Telescope in range of the object and listen to radio waves and any other signs of activity, intelligent or otherwise.

Given the increasing amounts of “announcements” by NASA of late, perhaps it is only a matter of time before that ever-elusive confirmation of our cosmic cousins comes to light.