Just one year after we saw the smallest ozone hole since its discovery, 2020’s Antarctic ozone hole has grown into one of the largest in recent years.

According to the World Meteorological Organization (WMO), the 2020 Antarctic ozone hole has peaked in size and depth. NASA’s satellite measurements show that stratospheric ozone over Antarctica reached a minimum value of 95 Dobson Units as of October 1. With values on the rise again, this signals that the ozone hole as reached its maximum depth for 2020.

As of September 20, 2020, NASA recorded the ozone hole’s extent at an area of 25 million square kilometres. That’s the largest one-day extent measured since 2015.

“There is much variability in how far ozone hole events develop each year. The 2020 ozone hole resembles the one from 2018, which also was a quite large hole, and is definitely in the upper part of the pack of the last fifteen years or so,” Vincent-Henri Peuch, Director of Copernicus Atmosphere Monitoring Service at ECMWF, said in a WMO press release. 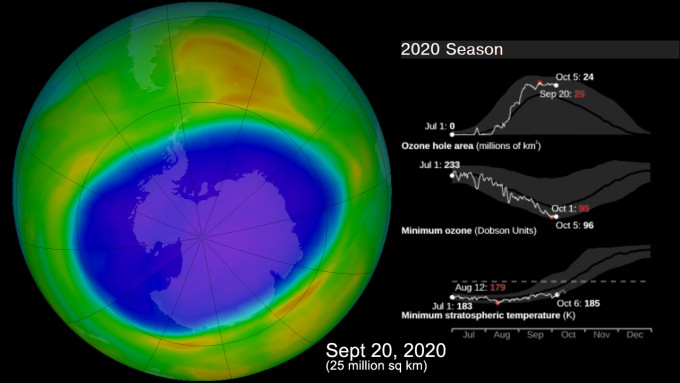 According to NASA’s records, since 2005, there have only been six years where the ozone hole’s daily area exceeded 25 million square kilometres. Four of those occurred between 2005-2008, and it has done so only twice since. Thus, ozone holes of this size are definitely becoming rarer. In 2018, the ozone hole reached a maximum just shy of that extent, with an area of 24.8 million square kilometres on September 20.

Roughly one year later, on September 8, 2019, the Antarctic ozone hole reached a surprisingly small maximum extent, covering only 16.4 million square kilometres. That was the smallest recorded since its discovery in 1985. It was also the earliest maximum in the past 24 years, and it closed in record time.

The reason for 2019’s remarkable record was a rare spell of “wonky” warm weather in the stratosphere during the ozone depletion season.

For 2020, the return of a strong southern polar vortex cooled the Antarctic stratosphere considerably compared to last year. Ozone-depleting chemical reactions depend on the presence of polar stratospheric clouds, and the ice crystals that form those clouds only freeze at temperatures below -78°C. Thus, a colder stratosphere produces more of these clouds, which results in more ozone depletion and a larger and deeper ozone hole. 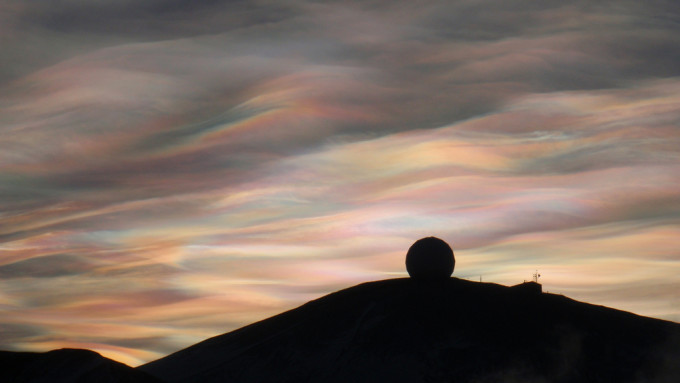 Stratospheric ozone is measured using satellites, which read the total amount of ozone detected in the column of air beneath it. These amounts are recorded in ‘Dobson Units’. According to NASA, the standard ozone thickness in a column of air is 300 Dobson Units (DU). A value of 220 DU is used as the lower limit of the natural variation that we can see in ozone thickness as the atmosphere swirls around the planet. An ‘ozone hole’ is specified as any region where the thickness of ozone drops below that 220 DU limit.

The largest ozone hole on record occurred on September 9, 2000, with an area of 29.9 million square kilometres. Since then, scientists have noted a definite trend towards smaller ozone holes. As CFC concentrations in the atmosphere drop, stratospheric weather and the southern polar vortex tend to have the most substantial impacts on ozone hole size, year by year. Projections are currently showing that, if the CFC ban continues, the ozone layer could completely repair itself as early as 2065.

“After the unusually small and short-lived ozone hole in 2019, which was driven by special meteorological conditions, we are registering a rather large one again this year,” Peuch said in the press release, “which confirms that we need to continue enforcing the Montreal Protocol banning emissions of ozone-depleting chemicals.”